In Korean culture, age is everything. If someone older than you says jump, you jump. If they take something from you, you bow and don’t say a word. Even if they hit you in the head repeatedly, you take it. Thank God I live in the U.S. ‘cuz would seriously not work for me. Anyway, … END_OF_DOCUMENT_TOKEN_TO_BE_REPLACED

I love change. I always have, and it’s gratifying to watch the #MeToo and #TimesUp movements create waves, promote dialogue and actually lead to positive action for actresses in Hollywood. Things aren’t settled by any means. There’s a long road ahead until we have parity on multiple fronts, but by in large the women of … END_OF_DOCUMENT_TOKEN_TO_BE_REPLACED

Lee Daniels’ “The Butler” is a box office hit for the second week in a row. I saw the film, and thought it exceedingly well done. High praise from me since, as a rule, I’m never first in line to see any film – or anything for that matter – where black people play a subservient role, no matter how dignified or substantiated such behavior may be.

Of course, Daniels has been doing the rounds promoting, and apparently he angered some black women with a comment he made during a recent interview with Larry King.

During the interview King brought up his sexuality – Daniels is gay – and he shared some childhood memories about wearing his mother’s pumps and getting punished for it. He also shared his belief that gay people are subject to more prejudice than black people are.

While doing research for his film “Precious,” Daniels visited a gay men’s health crisis center in New York. He said he was shocked to find the place was filled not with gay men but black women. “I thought I had walked into the welfare office,” he said. END_OF_DOCUMENT_TOKEN_TO_BE_REPLACED 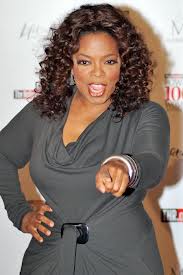 Oprah’s in the news this week. A shop girl who’s probably still kicking herself wouldn’t show her a purse while she was visiting Zurich for Tina Turner’s wedding last month.

Apparently she asked to see the purse and was told no; that she couldn’t afford it. Some reports say she left the store without purchasing the bag because she did not want the shop girl to get the commission.

The Swiss Tourism office later apologized to O, saying “we apologize that her feelings were hurt.” Let’s ignore how patronizing that apology sounds for the moment, since I’d wager money Oprah’s feelings were not hurt by the incident. Not when she can pull out her black card, call someone and have whatever purse she wants delivered that same day.

What’s interesting is that O later apologized for how the incident blew up in the media. END_OF_DOCUMENT_TOKEN_TO_BE_REPLACED