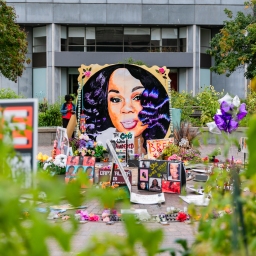 My sister and her friend got me a bike for my birthday, and I’ve been riding it almost every day. It feels wonderful to move fast, propelling myself forward, a cooling wind in my hair — even though I’ve probably eaten quite a few bugs. But I’ve seen a man recently, built, strong, walking along … END_OF_DOCUMENT_TOKEN_TO_BE_REPLACED

So, the past week has been interesting. I say interesting because everything that’s been happening should have already happened on or immediately after February 23, 2020. That’s the day Ahmaud Arbery was murdered while taking a jog in Georgia. But it was only this week that his murderers, father and son Gabriel and Travis McMichael, … END_OF_DOCUMENT_TOKEN_TO_BE_REPLACED

A very interesting article crossed my desk this week. It detailed an incident involving Sherman Alexie – American poet, writer and filmmaker and guest editor of 2015’s Best American Poetry – and his personal and professional issues with bias over a particular poem.  END_OF_DOCUMENT_TOKEN_TO_BE_REPLACED

“For too long, young women in New York City have experienced systemic disparity in all areas of life, whether its healthcare, education, or equal pay for equal work,” said Mark-Viverito in a statement. “These injustices are especially pervasive for young women of color, who have been denied opportunity for advancement and success time and time again throughout history. We are here today to say ‘no more.’ It’s time we stand up with women everywhere tackle this inequality head on — and this first-of-its-kind initiative will do just that.”

Of course, young women of color in New York aren’t the only ones who’ve suffered from systemic bias and discrimination, but that such a large metropolitan area is taking a step like this is encouraging — particularly because there was no predicating incident of note that would have made such a step necessary for PR purposes. END_OF_DOCUMENT_TOKEN_TO_BE_REPLACED