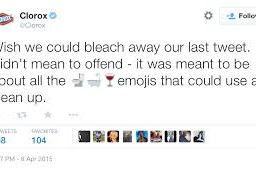 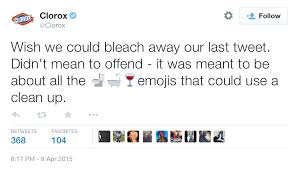 Before you write in blasting me and Diversity Executive for insensitivity, I want you to know I chose that title deliberately. The point? Don’t overreact. Some things deserve your time and angst — Clorox’s April 9th tweet is not one of them.

I saw the news when it came out, and I was planning to ignore it — but just today someone brought it to my attention, again. So I’m going on record saying, chill people. Not everything is race related.

When I first read the tweet: “New emojis are alright but where’s the bleach,” I didn’t even get the racially motivated furor. I thought, oh, they want a little bottle of bleach. And why not? They seem to have an emoji for everything else. Someone had to explain to me that the upset was related to Apple’s new emojis. END_OF_DOCUMENT_TOKEN_TO_BE_REPLACED