I can’t get away from these hashtags, y’all. If you haven’t heard the story of #planebae, let what you read here serve as “a digital-age cautionary tale about privacy, identity, ethics and consent.”

Here’s what happened. Earlier this month two women on a plane switched seats so that one could sit next to her boyfriend. The woman who let the couple sit together had no idea she’d been deliberately targeted for chicanery. In a premeditated set up, the couple seated behind her – led by Rosey Blair – recorded and live tweeted her every interaction with her attractive seatmate, Euan Holder.

When the #planebae Twitter thread went viral, Holder, a former pro soccer player turned model, was only too happy to jump into the media fray and milk it for all it was worth. He even put #planebae in his Twitter profile. But few seemed to care that his erstwhile seatmate was unhappy with the sudden, very intense spotlight.

The woman released a clear statement to BusinessInsider:

“I am a young professional woman. On July 2, I took a commercial flight from New York to Dallas. Without my knowledge or consent, other passengers photographed me and recorded my conversation with a seatmate. They posted images and recordings to social media, and speculated unfairly about my private conduct.

Since then, my personal information has been widely distributed online. Strangers publicly discussed my private life based on patently false information.

I have been doxxed, shamed, insulted and harassed. Voyeurs have come looking for me online and in the real world.

I did not ask for and do not seek attention. #PlaneBae is not a romance – it is a digital-age cautionary tale about privacy, identity, ethics and consent.

Please continue to respect my privacy, and my desire to remain anonymous.”

Some of the social media responses are telling in their complete lack of sympathy for this woman, which I find ridiculous, troubling, yet sadly, not at all surprising. People can be remarkably hard and unforgiving when they feel a woman has behaved in an unseemly or forward fashion, and privacy is essentially a thing of the past. But most of us still believe we can achieve it, if we don’t actively court attention. #planebae proves without a shadow of doubt, when you’re within eye or earshot of the public, you can’t 100 percent trust anyone.

I’ll give you another example. Meghan Markle, Duchess of Sussex, found herself headlining the news this week after an Irish politician she spoke to at a garden party tweeted about their conversation. This is significant because the conversation was about abortion, and as a Royal, it’s a big no no for her to offer an opinion on anything political.

“Irish Senator Catherine Noone tweeted she had “had a chat” with her about the May referendum that approved scrapping Ireland’s abortion ban, according to the Irish Times. “She watched with interest and was pleased to see the result,” Noone wrote.

“Noone then appeared to backtrack her statement with another Tweet, saying: “I should say she seemed pleased—she was interested and very measured, not political at all.” Both tweets were later deleted, the Irish Times reports, and Noone told the Irish Independent her words had been “unintentionally misleading.”

Unintentionally misleading my bum. Noone is a Senator. Abortion is a divisive and controversial issue. What did she think was going to happen if she attached that issue to a member of the British royalty? That no one would care? Try again, lady. Now, poor Markle may find herself on the bad side of a displeased Queen.

The difference here is Markle knows to be cautious about her conversations. She’s fully aware that her every smile, her every word, and certainly her every outfit, will be intensely scrutinized. Of course, I don’t know what was actually said at the garden party, but I’d wager she was cautious in this scenario too. But just her proximity to controversy – and to this Senator’s opportunistic tweeting – was enough to get her in trouble.

The unfortunate female half of #planebae had no idea she was being recorded and broadcast. Further, she had no reason to think strangers would exhibit that kind of behavior toward her; she’s not a public figure, nor is she a celebrity. Yet the following responses from people on social media suggest that she should be treated the same way. They come from an article on The Atlantic:

“We do it everyday to celebrities. No difference. Outrage culture is so dumb,” wrote one Instagram user below a BuzzFeed News post on the story.

“It was harmless, and it’s over. Seriously,” said someone else.

“Why is this such a big deal?” asked another. “It’s not an invasion of privacy.”

I totally disagree. It is different because this woman is not a celebrity who knows that public attention is a well-established part of the game. It’s certainly not harmless because this horrible, thirsty, trifling couple exposed this woman to potential damage and even danger.

Women know what some people will think of a woman befriending or flirting with a man on a plane, and it’s not good. #planebae is a self-described professional. This foolishness could endanger her job or damage her career, and that’s not all. She said it best:

“I have been doxxed, shamed, insulted and harassed. Voyeurs have come looking for me online and in the real world.

I did not ask for and do not seek attention. #PlaneBae is not a romance – it is a digital-age cautionary tale about privacy, identity, ethics and consent.”

Let her misfortune be a lesson to all of us regular folk walking around, flying on planes and quietly living our lives: Guard your image. You never know when someone’s recording, posting, or what they’ll do with your information. People will ruthlessly slice, dice, chop and splice until the truth is almost completely unrecognizable, if it serves them to do so.

I’ve been known to manipulate words with the best of them to create a compelling narrative, but I never veer far from the truth without explicitly saying, this is fiction. Truth, however, is subjective these days, and the journalistic integrity I pride myself on is not always common in the land of social media. 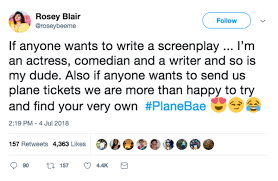 Both Holder and Blair apologized when the backlash from #planebae got too hot, but who cares? It’s far too little too late. You can delete tweets, and say you’re sorry, but the damage has been done. A woman’s public image has been altered without her permission, and it will never go back to its former state. We’re adults. We know better, but the lure of quick fame is too much for small minds to resist, and things like common decency and common sense quickly go out the window.

We live in a vain, voyeuristic world, and there are desperate, callous, plain old rude people everywhere who will do anything to manipulate the media to get attention for personal and professional gain. Whether you’re on a plane, train or just walking the dog, guard your image. An innocent conversation or even a light flirtation could very easily be used against you.