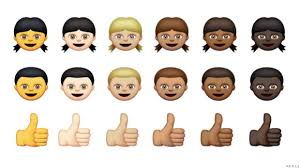 If you’ve ever searched for and didn’t find the perfect emoji for your text or email, your disappointment may soon be at an end. Apple is planning to release a plethora of new racially diverse emojis in a variety of skin shades.

In new versions of the company’s iOS and OS X operating systems, consumers can select an emoji, then hold and tap their preferred appearance. No word on exactly when it will happen, but there’s no harm in letting that new tech gadget anticipation build.

Apple added the new racially diverse emoji with help from the Unicode Consortium, an industry standards group that determines which emojis smartphone users have access to. Apparently, The Consortium proposed increasing the diversity of emoji skin tones in November 2014 amid increasing criticism of their lack of diversity.

Post announcement, people were pleased, but there’s been more criticism around the yellow emoji, a color that has negative connotations for some Asians. But the yellow is not an actual color — it’s a default setting related to how the emojis are created. The Huffington Post published a piece yesterday clarifying things.

Color controversy aside, given how popular emojis are to virtual and cellphone communications, this is a small but significant step from Apple to promote inclusion and acknowledge diversity and consumer demands.