So the other day my phone rings while I’m on the train, and a friend says, “So you speak French now.”

I knew exactly what she was talking about, but I played dumb to prompt whatever was coming next. 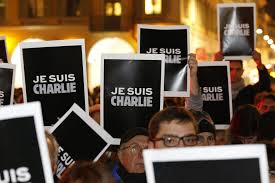 For a moment, I just sat there. I took the phone from my ear and looked at it. Then I told her roughly the following:

Let me explain something to you, and I want you to listen very closely because what I’m about to say is not only important for you to know about my character, it’s important information for you to know as it will inform how you should deal with me here after.

Just because I’m pro-black does not in any way mean that I’m anti-anything else. Quite the contrary.

Sadly, this kind of segmentation or isolationist thinking is unbearably common in discussions of diversity and inclusion. A case of “you’re always talking about race so you must be a racist,” or “you must hold prejudice,” or “you must hate everyone else.” No. No. And no.

I wish I never had to mention race, gender, bias, discrimination or pay inequity ever again. Really. Ever. But I live in this world, right now, and I care about these things. They affect me personally, and it’s part of my job as an editor covering specific facets of the human capital industry to address inequities that impact the workforce.

So yeah, silly friend. I speak French, now. A few words at least, and I will find a way to communicate in any language necessary to protest the senseless loss of life by those who seek to punish others for perceived misdeeds — or publishing certain cartoons — or to otherwise push their own selfish agendas.

If I have to learn sign language to show solidarity for people who are killed or hurt — physically or otherwise — as a result of terrorism, racism or any other -ism, I’ll do it. And I will certainly not hesitate to support my fellow journalists working to open minds and unlock closed or barred doors through words and ideas.

It doesn’t matter where in the world people are, or what race or ethnicity or other dimension of diversity they fall into, I care. It’s like Jon Stewart said in his Jan 7th show, “let’s call it team civilization … Our goal is to keep going.” Cherif and Said Kouachi — suspects in connection with the Charlie Hebdo murders — were also killed today along with a third suspected terrorist. At press time, details were still unfolding. That’s a lot of life lost — too much life, and for no really good reason, in my opinion.

I’d like to think that my small show of support — when joined with the thousands of others who retweeted “Je Suis Charlie,” or “I Am Charlie” — might help to deter or to at least raise questions around this type of tragedy. That the resulting “why” and “what can we do to prevent it from happening again” questions might help to spread of message of peace and acceptance, or to suggest dialogue and solidarity as a reasonable alternative to violence.

#Alllivesmatter is another popular hashtag these days because of Eric Garner’s death for a good reason — it’s the truth. But this week, “Je Suis Charlie.” Next time, sadly, I may be saying something else.

One thought on “Je Suis Charlie: I Support Humanity #JeSuisCharlie”