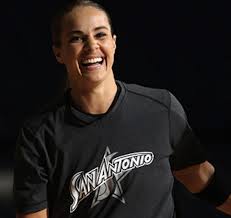 So Becky Hammon made history this week when the San Antonio Spurs named her assistant coach. Hammon is only the second female ever to achieve coach status in the NBA. But what is perhaps as notable as her appointment is how the team broke the news.

In the release, the team was very matter of fact, simply stating her name and position, there was no “first female” or similar descriptors to metaphorically pat themselves on the back and grab pro-diversity attention from the media. It was a straight forward announcement, and I like that.

Too often when women achieve a high powered position, it’s all about, “the first,” “the only,” the this, the that, and that does several things. One, it makes the appointment seem odd or special, a novelty, as my colleague Kate pointed out, and highlights the fact that this woman in power is not usual, leaving the why she was appointed open to interpretation. Even if a female leadership appointment is unusual, it does not usually serve the woman in question to be labeled this way. It adds an unnecessary spotlight and pressure to a position that is likely already quite challenging.

Sure many leaders will take the attention in stride – women are used to having to do a little bit more than men when they ascend to those top leadership positions – but what about everyone else? When you shine a spotlight on someone’s gender you essentially make them a target for other, perhaps not as fair minded or gracious folk. Like an online comments troll, these potentially divisive, likely unfair critics are just waiting for an opportunity to spew filth, misdirection and nonsense that can damage a leaders’ reputation and cast doubt where there is none.

Media outlets are trying to get readers attention with their first and only labels. I understand that perfectly since I am a member of the media, and I doubt very seriously whether the major outlets will make the implications of gender labeling more of a priority than say click thru rates. That’s unfortunate. Because until the big headline grabbers like Newsweek – CIA Vaults a Woman into Top Spy Ranks – stop using gender to make the news, women in power positions will remain a novelty, something to make note of for all the wrong reasons.

If we sensationalize gender differences, we may never get to that place where we feel completely comfortable with women in power. Female leadership appointments are not novelties. They are increasingly common – though admittedly not common enough – because it’s the way of business today, and we should treat them as such. Instead of making femininity a kind of disclaimer, let’s focus on the person, her skills, her plans, her accomplishments, not her sex.