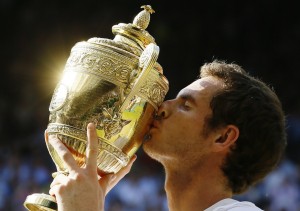 So I’m not a huge tennis fan, but I have been known to watch the occasional men’s match when I catch one on. Apparently Andy Murray, no. 5 ranked player in the world, has hired himself a female coach, retired former top-ranked female Amélie Mauresmo.

At first I didn’t understand why that was a big deal, but as I read the article I learned that Murray is the only player in the ATP top 100 coached by a female he is not related to.

Regardless of any ideas he or she may have had that she might be, like, a really good coach, everyone is of course wondering if his selection means the beginning of a movement where women train men in tennis.

I like the sound of that, for reasons that have nothing to do with this blog, but I doubt very seriously whether or not one interesting, allegedly odd, pairing between coach and player will be the gas to drive a movement. If anything Murray’s choice reinforces another trend in tennis – and in many workplace environments on or off the court – where top talent chooses other retired top talent to be their coach.

The article pointed out that no. 2-ranked Novak Djokovic (six-time Grand Slam champ Boris Becker), no. 4 Federer (six-time Grand Slam champ Stefan Edberg) to second-ranked American woman and no. 19 in the world Sloane Stephens (no. 12-ranked Paul Annacone, who also previously coached Federer and legend Pete Sampras), all have recently hired a standout as a personal teacher.

I hope Murray wins and wins big. His success – and Mauresmo’s by association – may not start a movement, but it will open some minds and change up the teacher-pupil dynamic in tennis.