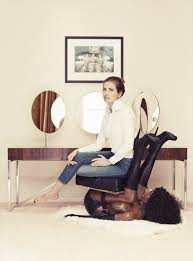 You may have already seen this image of Dasha Zhukova, editor-in-chief of Garage Magazine. If not, gird your loins. It’s real. The photo was used in an editorial on Buro 24/7, a site run by fashion darling Miroslava Duma, that was released on the Martin Luther King Jr.’s holiday.

Of course I’ve been vocal in my sadness over it on Twitter. But at the end of the day I have to consider several things.

1. In the immortal words of Zora Zeale Huston, black women are the mules of the world. We do not have a good or even an acceptable global image. Unless, of course, you find crack addicts, whores, baby’s mama’s and ill educated, neck popping ghetto birds positive ideals.

2. People will do anything for money, including debase their own people. Shala Monroque is the creative director for Garage magazine, and unless my understanding of that position is skewed – or she’s just a pretty, skinny figurehead because of her association with Larry Gagosian – she had to sign off on this. She is a black woman, and art bedamned, this is not an image she should have allowed to be released. I am not naive; I understand the game. I understand that advertisers care about clicks, and this joker image likely got them in spades. But this was just…sigh. I can’t fathom how this kind of disloyalty to your own gender was worth it.

3. The fact that this image was released on MLK Jr.’s Day was not an accident. I refuse to believe that. Yes, Dasha and Miroslava are Russian, yes Shala is from St. Lucia, or somewhere like that, so their connections to Dr. King may not be as strong as mine because I am American. But he is a globally recognized figure. They knew this image would be controversial. If you didn’t know it was MLK Jr’s Day when you released the story, you should have. This was exceedingly well planned. From the pure white imagery in the photography to the change made in the chair based on a 1969 image from Allen Jones, where the female dummy was white. I do not believe they didn’t know the significance of the article’s release date. But you have to give it to ’em. It was very well played. If they wanted controversy, attention, publicity, they got it. Big time.

4. Black women have got to do more and be better than the reject label the world is determined to stamp on our foreheads. And Black men? Have our backs. This is a slap in the face wake up call for us to step up to the plate and swing for the fences, every, single, time. We have to teach people how to treat us, and it starts with how we treat ourselves and how we treat each other. I printed this image out. It is now directly in my line of sight as I write this because I want to be continually reminded that I have to do my part to change this negativity. I have to do my part, and encourage all of my sisters to do theirs, to change this narrative, as Olivia Pope would say. So you’ve been warned world. If you thought I was too much before, *winks,* get ready. I’m going to be so fabulous now – on every level – it’s gonna make you wanna faint.

5. Art is no excuse for ignorance. “The art and fashion industries are the few bastions of society where blatant racism and ignorance are given the green light in the name of creativity.” That quote comes from Claire Sulmers, editor of FashionBombDaily.com in an article about this on BlackVoices, and it sums it up beautifully. There are so many excuses for ignorance and hate and prejudice, but at the end of the day, those of us who walk on the side of right, or even reasonable, know BS when we see it.