Barilla Chairman Guido Barilla apparently would prefer it if only those who belong to traditional families eat his pasta. So gay folk, go buy Creamette. 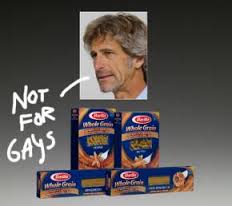 According to a translation of his comments, originally made in Italian, he said: “We won’t include gays in our ads, because we like the traditional family. If gays don’t like it, they can always ear another brand of pasta. Everyone is free to do what they want, provided it doesn’t bother anyone else.”

Well said, Guido! If you want to alienate gays and straights, blacks and whites, or anyone who cares about respect, equality, oh, and has an opinion on the value or immateriality of the so-called traditional family. Well done, indeed.

It would serve Barilla right if anyone who found his comments antiquated and offensive stopped buying Barilla pasta immediately. In fact, the social media machine has already spoken if these hashtags are any indication: #boicottabarilla, #boycottbarilla.

Thank goodness for arrogance and transparency, I say! It’s always best to know how people really feel so you can make informed choices and behave in a truthful – if not traditional – way.